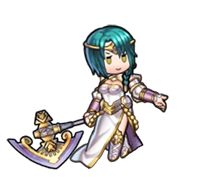 Askr has been challenged by the heavens to undergo the trials of Mjölnir’s Strike—and commanding the enemy assault is Thórr, the god of war herself! 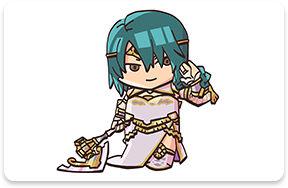 Thórr unleashed the power of Mjölnir to invade Askr and put humanity to the test, but she wasn’t exactly forthcoming on the reasons why… 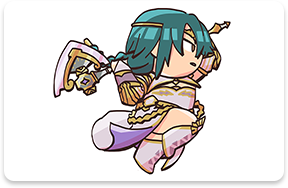 Still, it doesn’t seem like she’s out to destroy mankind outright. Out of respect for human strength, she told us about Midgard’s Shield, which would allow us to survive the onslaught and fight back. 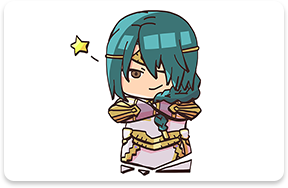 She also formed contracts with Líf and Thrasir, making them divine champions in service to the gods. Thórr herself serves the one who created all…so I’m curious what her real goal is! 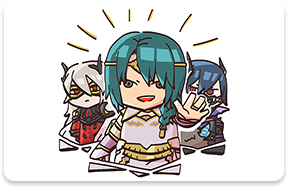 Strategist for Múspell, the Kingdom of Flame. Likes to play tricks and manipulate people. A long-time acquaintance of Thórr’s.

General of the realm of the dead. At his queen’s command, this dark swordsman fights in hopes that all the living will join the ranks of the dead. After escaping Hel’s control, he forms a contract with Thórr to become a celestial warrior with dominion over the nine worlds.

General of the realm of the dead. At her queen’s command, this witch uses her powers to swell the ranks of the dead. After escaping Hel’s control, she forms a contract with Thórr to become a celestial warrior with dominion over the nine worlds.