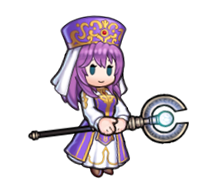 Eremiya might seem like a kindly bishop at first, but during the War of Heroes, she was actually the leader of a group of assassins who had their sights set on reviving the Shadow Dragon! 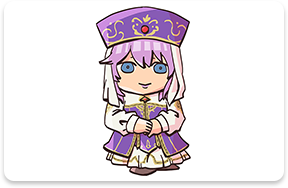 She trained Katarina, Clarisse, and Legion to be killers from an early age, abducted priestesses, and even plotted to assassinate Marth—all to further her ambition of bringing the Shadow Dragon back. 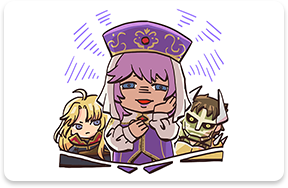 Eremiya didn’t have a shred of mercy for her young charges. She treated them like puppets and didn’t care if they broke. Yet, she too was a victim of conflict… 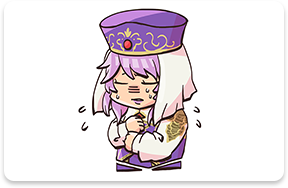 She was once the caretaker of an orphanage, and when the children under her care perished as a result of war, Gharnef spied an opportunity and corrupted her broken heart. I hope being in Askr will help mend her ways and she can join us in fighting the good fight! 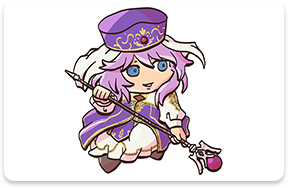 A student of Gotoh, the White Sage. Hatched a scheme to revive the Shadow Dragon, Medeus, and rule the world. Took advantage of Eremiya’s despair to corrupt her mind.

One of a group of assassins plotting to kill Marth. Katarina’s friend. Cruel and lacks manners, but yearns for a family. Raised by Eremiya.

Reserved and harboring a dark secret, this trainee tactician depends on others. Eremiya ordered her to assassinate Marth.