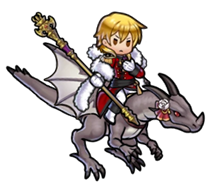 Eldigan, ruler of Nordion, has come to the ball! I see that even amid the festivities, he’s as down to earth as ever. I guess even a spectacle like this is a common sight for a king! 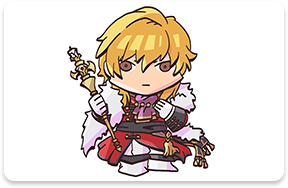 Eldigan is seen as one of the greatest knights in Jugdral, and he’s also well-known as the wielder of Mystletainn, the Demon Sword. That said, it looks like he brought a golden staff to the ball. This is no place for a Demon Sword, after all! 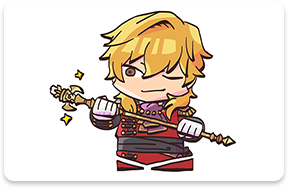 Eldigan is known as the Lionheart, and his new outfit lives up to the name! The mane-like trim and golden embellishments really do give him a dignified, regal air.

He’s certainly making his presence felt—no one has been able to take their eyes off him, including his sister Lachesis! Maybe I should ask him for a dance? 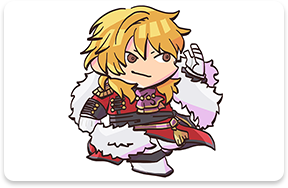 Younger sister of Eldigan, ruler of Nordion. Sheds her armor for a gorgeous dress and a night of dancing. Adores her older brother, Eldigan, to the point that other men pale in comparison.

Heir to Chalphy, descendant of the crusader Baldr, and Seliph’s father. He’s courageous and has a strong sense of justice. A close friend of Eldigan’s.

Prince of Leonster. Gallantly taking part in the dance festival as part of his royal duty. A close friend of Eldigan’s.