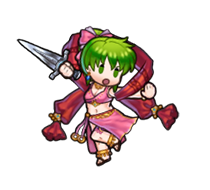 Lene is a dancer who once entertained people in the city of Dahna, on the continent of Jugdral. She’s energetic, entirely self-taught, and dreams of reuniting with her long-lost mother, who was said to also be a dancer. 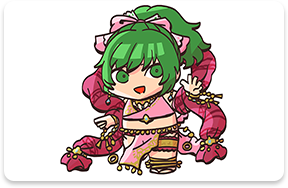 Having become popular in Dahna, Lene later encountered the mercenary Ares while he was stationed in the city. The two hit it off and quickly became close. 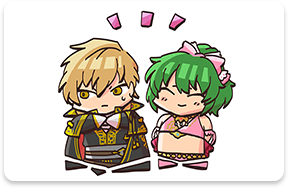 One day, the lord of Dahna took Lene captive, seeking to make her his own. She was completely at his mercy, but fortunately, Ares cut ties with the mercenaries to come to her rescue! 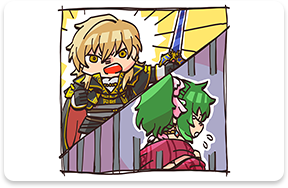 After Lene was freed, she and Ares joined Seliph’s army in their struggle against the Grannvale Empire. I hear her lively dancing did much to reinvigorate her comrades on the battlefield! 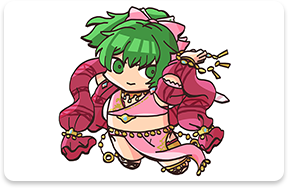 Eldigan’s son and heir to Mystletainn. After his parents passed away, he joined up with a mercenary captain called Javarro. He rescued Lene from peril.

A dancer who travels the world. She looks sweet, but she doesn’t necessarily act that way. Descendant of the high priest Bragi. Lene’s mother.