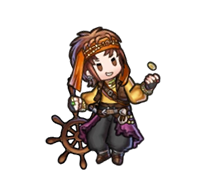 Lifis was once a pirate who had the area around the village of Iz on the continent of Jugdral at his mercy. I suppose the pirate festival must have rekindled his old love for buccaneering, because he’s here to steal the show! 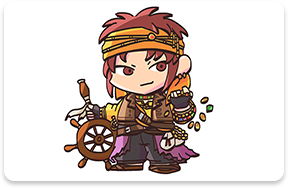 Though I have to say, this outfit makes it look like he’s more concerned with gathering treasure rather than being a swashbuckling pirate. Still, I think the look suits him! 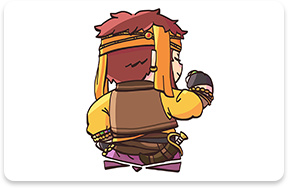 Lifis has quite literally taken the helm, as he’s carrying a ship’s wheel as his weapon. Maybe it represents his desire to leave the humble surroundings of the Iz coast and venture into the oceans beyond? 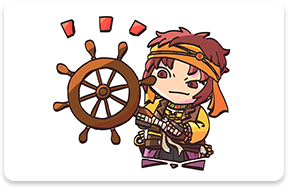 Lifis seems happy to be returning to the pirate’s life after so long, but I hope he doesn’t get too carried away! I don’t want to have to get Leif and Eyvel on his case again! 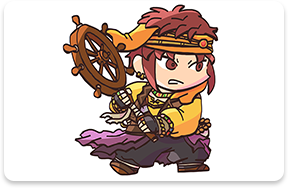 Quan’s son. He was hiding in Fiana but rose up after an attack by imperial forces. He defeated Lifis during his days of tormenting the villagers of Iz.

Mistress of Fiana, leader of the Freeblades. Took in Leif and company when they fled the Grannvale Empire. Worked with Leif to defeat Lifis.