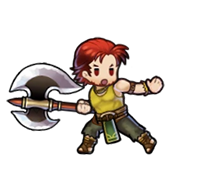 Dorcas is a warrior from the kingdom of Bern in Elibe! He’s a burly, reticent Hero with a tender side—he’ll do anything for his wife. 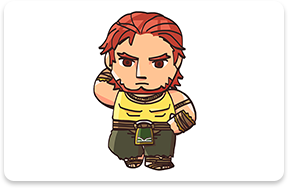 Dorcas lived in the outlands of Bern with his wife, where they led a difficult life. His wife was suffering from a bad leg caused by illness, but they weren’t able to afford the medicine for her treatment. 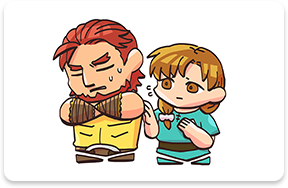 And so, Dorcas was forced to lend his axe to a gang of bandits to help come up with the money. But when he encountered Lyn, who conveyed his wife’s feelings to him, Dorcas parted ways with the bandits, choosing to become a mercenary instead. 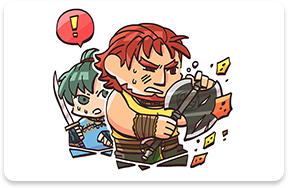 As a mercenary, Dorcas helped to keep a great many people safe. He’s not one to boast about his achievements, but I think everyone’s grateful for what he’s done! 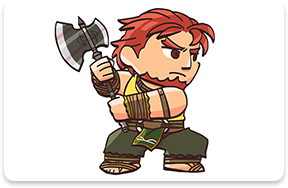 A woman who grew up on the plains before learning she is nobility of Caelin. She convinces Dorcas to leave the bandits and recruits him as a mercenary.

A warrior from a remote region who takes pride in his strength. Aiming to be the strongest of them all, he trains in search of a worthy opponent. Dorcas’s comrade in arms.

A sincere noble of Pherae. His friends Lyn and Hector serve him loyally. Hires Dorcas to serve as his guard.