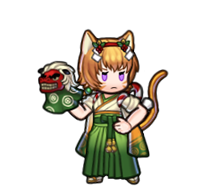 We’re not the only ones celebrating the New Year. It turns out the laguz celebrate the occasion too, and they do it in style! This year, Lethe has come to represent the laguz and join us in celebrating, wearing New Year garb! 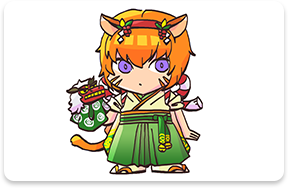 People often think this kind of clothing is difficult to move around in, but that won’t stop Lethe. She looks as nimble and agile as ever! 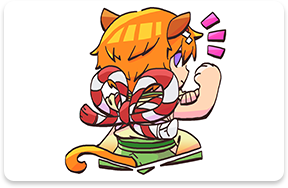 That lion’s-head mask she’s carrying is used in the lion dance, a traditional New Year performance. In some cultures, it’s good luck to get “bitten” by the lion during the dance—they say that if it bites a child on the head, they’ll grow up to be strong and healthy! (I guess it doesn’t bite hard, then!) 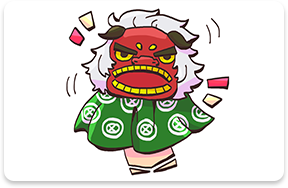 I hope Lethe enjoys celebrating the New Year in a different way than how they do it in Gallia. Let’s put our differences behind us and work together to keep the peace! 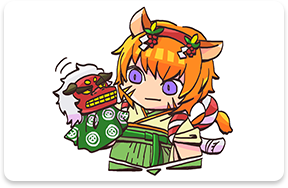 The lion ruler of Gallia, the home of the beast tribe of laguz. Uses his wisdom and courage to seek a path toward peace with the beorc. Lethe has pledged her loyalty to him.

A cat warrior from Gallia, the home of the beast tribe of laguz. Though young, he has earned his king’s trust. Considered the right hand of the future king. He’s the commander of Lethe’s sister, Lyre.

A tiger warrior from Gallia, the home of the beast tribe of laguz. A kind, peace-loving giant. Lethe’s subordinate.