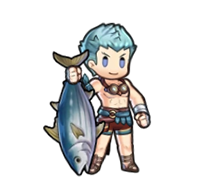 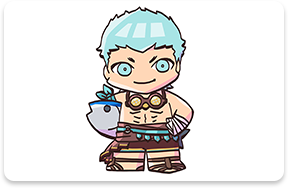 He looks a bit like an old-fashioned gladiator in that outfit. Apparently he’s planning to go fishing…probably by jumping into the water and wrestling the poor fish into submission! 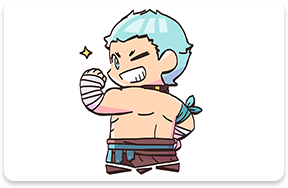 Oh my—it looks like he managed to catch a whopper after all! And yet, I doubt even a fish of that magnitude is enough to satisfy his competitive spirit! 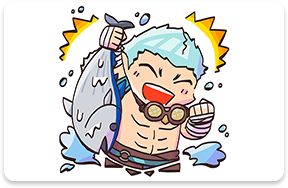 Anyway, that’s Caspar, diving off into the ocean to see if he can find a bigger catch… I can’t wait to see what he manages to get ahold of next! 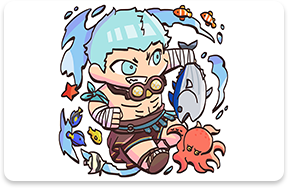 Heir to House Hevring of the Adrestian Empire. Has deep friendship with the second son of House Bergliez, Caspar.

Child of the former captain of the Knights of Seiros, Jeralt. A stoic, capable professor at the Officers Academy. Caspar’s professor.

A commoner who was adopted by Lord Lonato. He is so focused on his goals, he won’t take any breaks from his training, even while at the beach. He’s competing with Caspar to see who can catch the most fish.