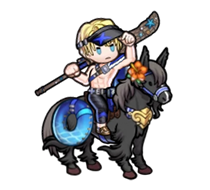 Where’s Dimitri? I’m sure we invited him… What?! He’s gone swimming all the way to the next island?! Well, I suppose that kind of stamina is exactly what we should expect from someone in charge of one of the houses of Fódlan’s Officers Academy! 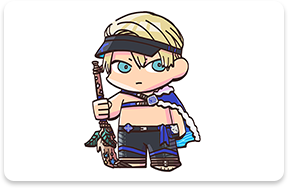 He’s certainly pulled off a stylish look with that sun visor and swimsuit combination! By the way, that brooch he’s using to fasten his fetching towel-cape matches the one he got for his professor’s birthday! 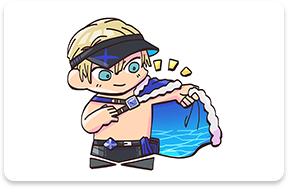 Oh, and check out the palm leaves he’s used to decorate that large wooden oar he’s carrying! That thing looks pretty heavy, but it doesn’t seem like he’s having any trouble at all using it one-handed! 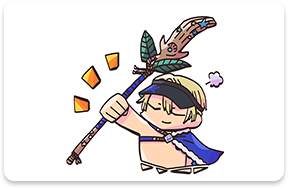 Dimitri always seems to have so much on his mind. I hope he takes this opportunity to relax, enjoy his vacation, and blow away those dark clouds a little! 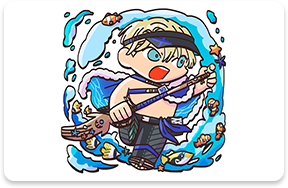 Child of the former captain of the Knights of Seiros, Jeralt. A stoic, capable professor at the Officers Academy. Guides Dimitri as his professor.

Princess and heir apparent of the Adrestian Empire. Her steadfast ambition is veiled by her elegant, self-confident demeanor. She and Dimitri were friendly as children.

Member of House Riegan and leader of the Leicester Alliance. The sea air makes his heart race. As leader of the Golden Deer House, he is a rival to Dimitri.