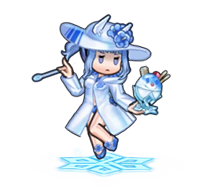 Nifl is the god of ice, and rules over a frozen world that shares her name. Now she’s taking a respite from the cold to join us on the sunny beach, complete with a new swimsuit to mark the occasion! 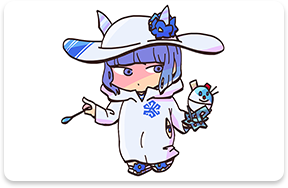 I see her ice-cold nature shows no sign of thawing—even with the sun beating down on us, Nifl’s not even breaking a sweat! 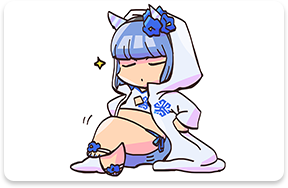 And of course, she’s carrying a huge serving of shaved ice with her. It’s not just any old shaved ice, though—it’s imbued with her divine power, and one mouthful is enough to cool both the body and the soul! I wonder what it tastes like… 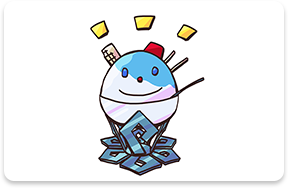 Nifl has said she doesn’t care for hot places, and she’s certainly looking as cool and aloof as ever, but something tells me she’s enjoying the vacation just the same. Well, if my hunch is right, I hope she takes this opportunity to hit the beach this summer! 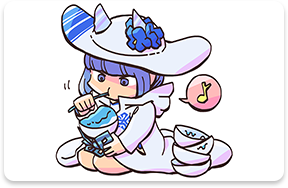 The gentle second princess of Nifl, the Kingdom of Ice, where the god Nifl is worshipped. Seeks revenge against Surtr.

The god of Múspell, the Kingdom of Flame. His raging personality burns white-hot with a drive toward violence. Nifl’s arch-enemy.