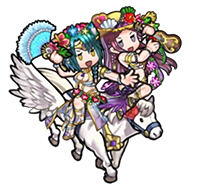 I can’t believe what I’m seeing! Thórr, the god of war herself, and Loki, Múspell’s infamous strategist, have come to join our vacation and steal the show! 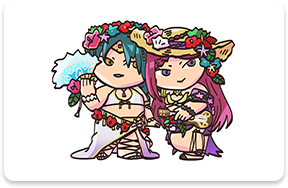 Thórr’s wearing a white swimsuit with a bright and breezy look accentuated with flowers and seashells! 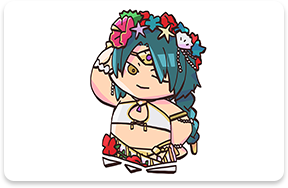 Meanwhile, Loki’s showing off her sophisticated style with a lovely purple swimsuit. Isn’t that big straw hat of hers charming? 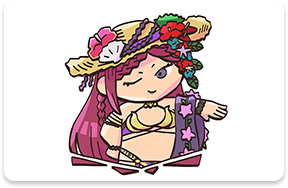 You may have encountered Thórr in Mjölnir’s Strike, a series of battles where she puts humanity to the test. I hope this means she and Loki give us a break for once during our vacation! 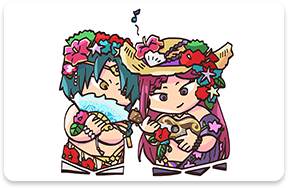 General of the realm of the dead. At his queen’s command, this dark swordsman fights in hopes that all the living will join the ranks of the dead. After escaping Hel’s control, he forms a contract with Thórr to become a celestial warrior with dominion over the nine worlds.

General of the realm of the dead. At her queen’s command, this witch uses her powers to swell the ranks of the dead. After escaping Hel’s control, she forms a contract with Thórr to become a celestial warrior with dominion over the nine worlds.

King of Múspell, the Kingdom of Flame. Carries the blood of the Flame Dragon. A harsh ruler whose desire for conquest is relentless. He invaded Nifl with Loki’s help.