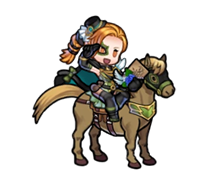 Cath is coming to the thief festival! She’s an expert thief who’s traveled the world’s battlefields and relieved a number of wicked nobles of their riches! 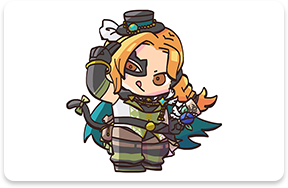 Her outfit for the festival features a mix of black and green to help her blend into the shadows. But it’s not just gold she’s prepared to pilfer—her jewel-shaped brooch and miniature hat give her a look that’s perfect for stealing hearts as well! 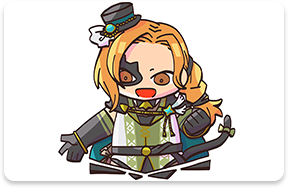 The key detail here is her calling card adorned with a blue rose. I wonder what the message on it says! 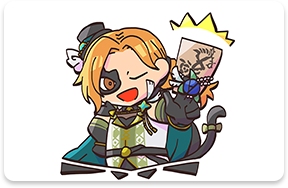 Cath has called herself a master thief ever since her adventures in Elibe. I can’t wait to see how she’ll wow us at the festival! 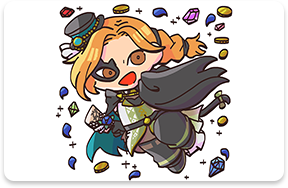 The son of Eliwood, Marquess of Pherae. Talented leader of Pherae’s army. He gets to know Cath on the battlefield and invites her to join him.

An outpost warrior who went on a journey to find his beloved daughter, Fir. He reminds Cath of her father.

Grew up in an orphanage in Lycia with a pair of brothers, Lugh and Raigh. Seeks revenge on Bern for killing the caretaker of the orphanage. Cath has invited him to the festival, and means to make him her partner in crime—whether he wants to be or not.