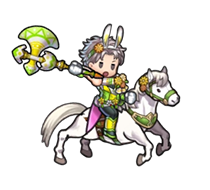 In eastern Magvel, there’s a sprawling forest called the Darkling Woods. There, you’ll find the village of Caer Pelyn, and Saleh here is its guardian! That said, today he’s the guardian of the spring festival! 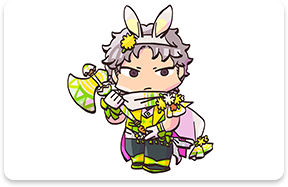 Saleh usually cuts a cool, composed, intellectual figure, so I’m seeing him in a new light with this fancy outfit of his! He’s bringing out the festival flair with that bunny-ear hairband and that elegant scarf. 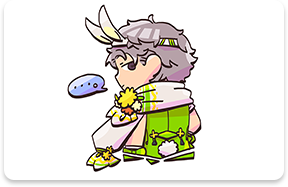 What’s a spring festival without some painted eggs? That explains the unusual design of Saleh’s axe—it’s like an egg that’s been cracked open to reveal a blade inside! I wonder what kinds of prizes the other festival eggs contain? 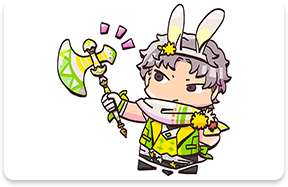 Saleh can be a little stern and hard to approach, so I’m sure his festive makeover will be a hit with everyone around him. I bet Myrrh and Ewan in particular will just love his new look! 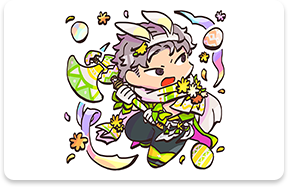 A manakete who is much older than her appearance suggests. She’s shy but oddly attached to Ephraim. She is worshipped in the village of Caer Pelyn, where Saleh lives.

A member of Gerik’s Mercenaries. Tethys’s brother. He reveres Saleh, his teacher.