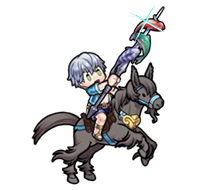 Here’s Ashe, a Hero who works hard but is easy to get along with! It looks like he got himself ready for the beach with a casual-looking swimsuit! 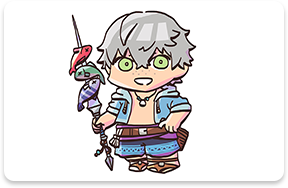 That vivid blue color really makes you think of the summer sea, and that seashell pendant he’s wearing is the perfect accessory for long days at the beach! 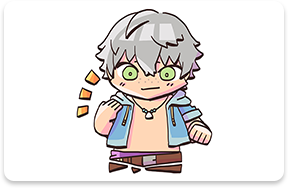 I’m sure you didn’t miss that hefty weapon he’s carrying, either. Apparently, it’s a harpoon used for spearfishing. And that basket at his waist is for carrying his catch of the day! 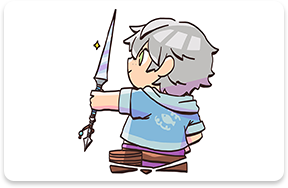 Ashe has always been a hard worker, so I hope he gets a chance to take a break this summer… Oh, look, he’s caught another fish! Let’s go see what he got! 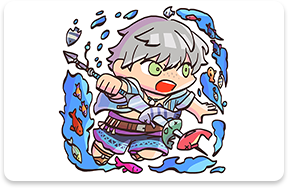 Crown prince of the Holy Kingdom of Faerghus. Known for his chivalry, it seems a darkness may lurk beneath the surface. He’s the leader of the Blue Lion House, to which Ashe belongs.

Child of the former captain of the Knights of Seiros, Jeralt. A stoic, capable professor at the Officers Academy. Ashe’s professor.

Second son of House Bergliez of the Adrestian Empire. Even at the beach, his mind is solely focused on his training and getting stronger. He’s competing with Ashe to see who can catch the most fish.