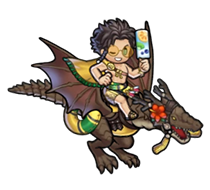 Today, I’m writing from our vacation on a tropical island! Oh, and who’s this snoozing in the shade on the beach? Why, it’s none other than Claude, who’s come all the way from the Officers Academy in Fódlan! 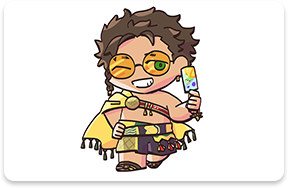 Claude’s wearing swim trunks for his summer outfit, making for an active, sporty look! You might have also noticed the bracelet glinting on his left wrist—it matches the one he got for his professor’s birthday! 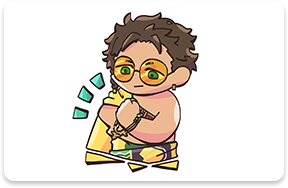 That ice pop he’s carrying certainly looks refreshing too. I hear it’s tropical-fruit flavor, but perhaps more importantly, it can also be used as a dagger! …Wait, was that supposed to be a secret? 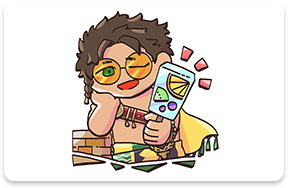 Anyway, we’ve also invited Claude’s classmates Dimitri and Edelgard to join us on our summer vacation. I hope they take this chance to unwind from all the fighting back home and get some R&R! 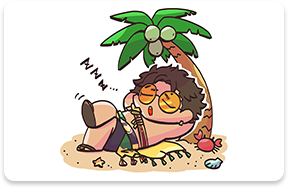 Child of the former captain of the Knights of Seiros, Jeralt. A stoic, capable professor at the Officers Academy. Guides Claude as his professor.

Princess and heir apparent of the Adrestian Empire. Her steadfast ambition is veiled by her elegant, self-confident demeanor. As leader of the Black Eagle House, she is a rival to Claude.

Crown prince of the Holy Kingdom of Faerghus and student at Garreg Mach Monastery. He has come to the tropics for some summer training. As leader of the Blue Lion House, he is a rival to Claude.