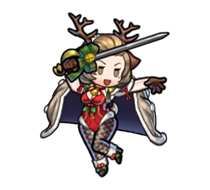 Manuela’s a professor and physician at the Officers Academy at Garreg Mach Monastery. But today, she’s making a bold, reindeer-themed appearance at Askr’s winter festival! 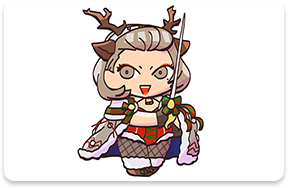 Manuela was once a famous songstress in Enbarr, the capital of the Adrestian Empire, and with that gorgeous cape along with the rest of her eye-catching outfit, it’s almost like she never left the stage! 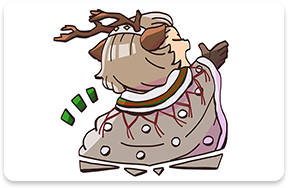 She can do more than hold a tune, of course. She’s an adept user of magic, and she’s no slouch with a sword, either. In fact, I hear she’s going to be performing a sword dance that promises to be absolutely enchanting! 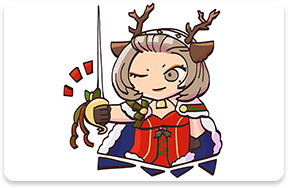 Though Manuela often complains about her love life, I’m sure her winter festival look will attract plenty of suitors for her to take her pick from. Maybe today’s the day she’ll find that special someone! 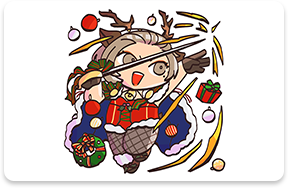 Child of the former captain of the Knights of Seiros, Jeralt. A stoic, capable professor at the Officers Academy. Manuela’s colleague.

A highly fastidious scholar of Crests who works as a professor at the Officers Academy at Garreg Mach Monastery. Every bit Manuela’s opposite, which leads to frequent quarrels.

The only member of common birth in the entire Black Eagle House. Once a member of a performing troupe, where Manuela was both her senior and mentor.