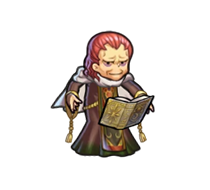 Aiming to exert control over all of Magvel, the Grado Empire embarked on a conquest of the neighboring nations. Which leads me to Riev—a priest known as the Blood Beryl who works in the shadows as one of the empire’s six generals! 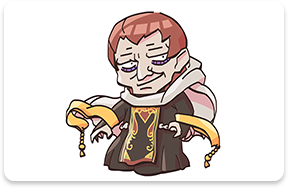 With his cunning, Riev served as an advisor to Lyon, the imperial prince. He contributed his knowledge of the dark arts to help break the seal on the Demon King! 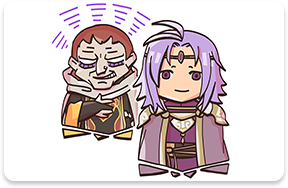 Riev was once a bishop of Rausten, but after he was banished by Mansel, the pontifex, he sought revenge by aiding Grado in its attempts to revive the Demon King. 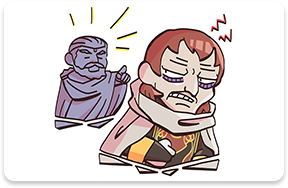 Riev is extremely intelligent and well versed in magic, and it’s a shame that he wasted his potential on petty revenge. I hope we can encourage him to use his talents in a more constructive way now that he’s with the Order of Heroes! 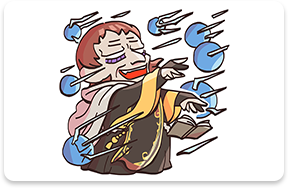 The pious and compassionate Divine Emperor of Rausten. Riev’s actions forced Mansel to excommunicate him and have him banished from the kingdom.

Beloved son of the emperor of Grado, Vigarde. Like his father, who is referred to as the Silent Emperor, he prefers to keep to himself. Riev serves as his advisor.

One of Grado’s six generals. Cruelty intoxicates him. Known as Moonstone. Riev approves of his strength.